When considering how they might stay open with full staffing during the 2020 pandemic, this meat packaging plant in Springdale, Ohio, came to Childress & Cunningham Architects for help. Their urgent request: design a large free-standing cafeteria dining room to accommodate their shift workers while maintaining social distancing. There are many factors to take into account when designing an addition as a quick pandemic response, beyond the immediate health concerns.

The onset of the viral crisis was rather sudden, prompting companies to adopt many temporary measures as critical needs were revealed. In this case, a tent was erected to contain food service handled by an outside vendor, as the existing dining space could not accommodate the social-distancing protocols needed. The tent would be functional through the warm summer months, but a more permanent solution was needed before autumn.

The existing building’s interior layout prohibited a simple expansion of the dining area, as it was not on the perimeter of the facility. As an all-new space, the client expressed their desire to build a large clear-span space using conventional wood studs and trusses. Other design goals included the minimizing of plumbing, clustering fixtures as much as possible and locating them close to an existing water line. Hand-washing sinks would be positioned where employees must walk past as they return to their work areas. A large coiling overhead door facilitates movement of vending machines and other equipment, permitting the space to be configured to serve other roles in the future, such as for company-wide gatherings or presentations.

To facilitate a speedy construction schedule, design decisions were made rapidly during regular meetings that included key contractors, with significant decisions being made based on short lead times by product suppliers. Childress & Cunningham Architects developed drawings for a foundation-only permit so that footings could be placed even while full construction documents were being finished. A design process that might have taken two or three months in other circumstances was completed in just one month.

What were the major factors that had to be considered, as this design came together so rapidly?

There have been a variety of strategies recommended by governing bodies like the CDC and OSHA, to disrupt the transmission of virus particles and thereby keep infection rates under control. The term Social Distancing can encompass many efforts, such as maintaining a 6-foot (2-meter) distance to others, the wearing of face masks, and the use of other kinds of barriers.

What such measures have in common is that they are intended to present obstacles to the natural methods of virus propagation, blocking a likely pathway that a virus-carrying micro-droplet could take. Other protocols, like hand washing, surface cleaning, and working from home may help to avoid potential exposure.

For some workplaces, it may be possible to spread people out by time, such as by having workers stagger their lunch breaks, to avoid congregations of large numbers of people. OSHA recommends this (https://www.osha.gov/Publications/OSHA4027.pdf), among other protocols, as does the CDC (https://www.cdc.gov/coronavirus/2019-ncov/community/organizations/meat-poultry-processing-workers-employers.html). For other settings, such as the factory described in this article, a common break time may be unavoidable, so what can be done in that case?

Feeding a work force calls for a large dining area, so it makes sense to consider what restaurants are doing (https://www.insider.com/ways-restaurants-are-getting-social-distancing-right-2020-5) to protect their staff and patrons. Most restaurants have tables and seats already laid out and cannot easily rearrange their seats. In these instances, every other table may be designated as not to be used, whether that be by placing signs, or storing cleaning and other supplies on intermediate tables, or by creative methods such as filling some seats with mannequins or stuffed animals. Guests can be isolated by means of clear plastic dividers or by small greenhouse-like structures in order to maintain a high seating capacity, but such dividers can be a big expense (as an example of a vendor, see this link: https://shop.tablebasedepot.com/products/custom-cafeteria-social-distance-barriers-any-size).

Where tables and chairs are not fixed in place, place settings can be planned out with fewer seats per table, and tables spread further apart. Doing so requires a much larger dining room, though, which in the case of this factory means a sizable Cafeteria Dining Area addition.

As with any building addition, the allowable size and location will be governed both by the local Zoning Code and the state’s Building Code. For ease of construction, this client wished to build an independent structure in the existing front yard. The first step was to check whether the Zoning Official would allow this, as many Zoning codes prohibit accessory structures in the front yard. By designing the new structure to attach to the existing facility, the question of whether this would be a non-conforming accessory structure is avoided.

The Building Code limits the size of a building based on both its use and its construction type, and the new Cafeteria would differ from the main factory building on both counts. As a non-separated addition, it might have caused the original factory to become non-conforming by introducing the greater hazard of a wood construction type. What is needed is fire separation; by treating the wall where new and old touch as a rated fire wall, the new portion can be evaluated as though it is a separate building, subject to its own code limitations without affecting the original building. 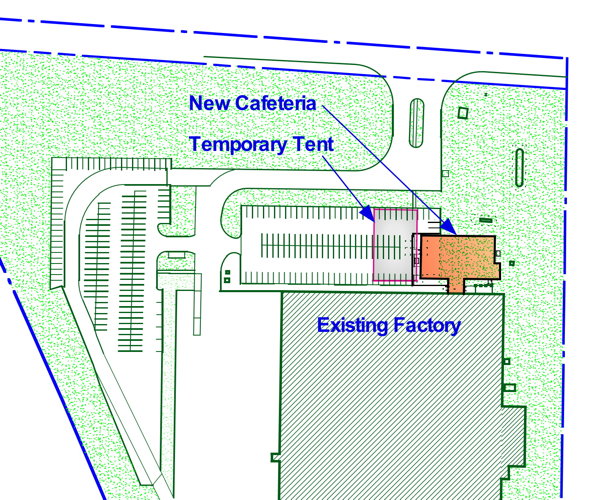 Achieving this fire wall means some necessary upgrades to the existing exterior wall and the connecting doors. Other portions of the exterior wall had to be shown to achieve a code-minimum fire rating where they face the new Cafeteria. While existing restrooms are close enough to continue to serve the occupants, two new single-user restrooms meet accessibility regulations.

The number of occupants, and hence the requirements for egress, still had to be determined based on code-stipulated floor area ratios for an Assembly space, even though the anticipated actual number of occupants would be about half as many when accounting for social distancing. Operable windows with sufficient natural ventilation were included, based on the calculated occupancy.

Childress & Cunningham Architects worked with the local building official to ensure that there would be no hindrance to the issuing of a building permit once the drawings were ready for permit submission.

DESIGN TO CONSTRUCTION IN A HURRY

Weekly meetings between the client, Architect, and contractors for various trades kept everyone on the same page and kept the project moving forward. This coordinated effort was aimed at getting an insulated and finished space ready for use before the weather turns cold. A temporary tent that stood over a portion of the parking lot throughout the spring and summer was taken down in the fall, when construction was completed.

Other articles regarding public health:

Michael Rountree
Project Manager at C|C Architects, with a Bachelor of Architecture from the University of Cincinnati and over 20 years with the company.