An all-new office building with modern design features and technology can be comfortably situated within a district where traditional design aesthetics are enforced. Such is the case at Harvest Financial Advisors, who enlisted Childress and Cunningham Architects to create their new headquarters.

The location presented multiple design constraints and challenges, such as those posed by a hillside site and neighborhood requirements as described later in this article. These limitations called for significant creativity. 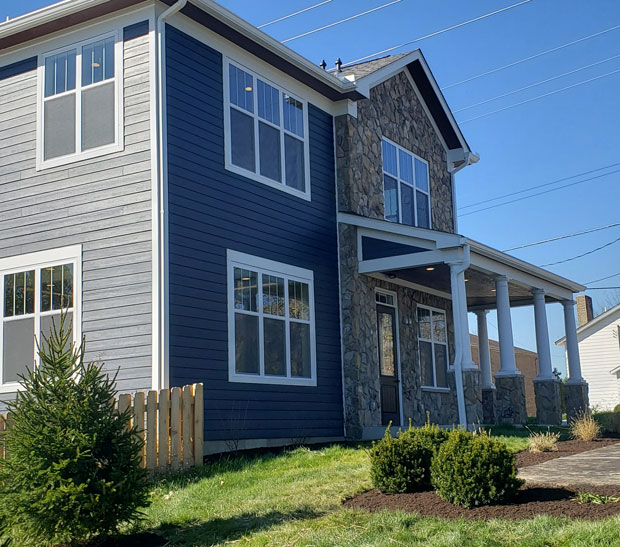 While many office buildings include open floor plans, these spaces are a little at odds with the more compartmentalized forms of traditional residential character. The spatial program at Harvest Financial called for both enclosed and open office areas. The open office space and hallways are clustered at the building’s core and rear, leaving smaller rooms like conference rooms and private offices to animate the street facade. These spaces neatly fit into smaller scale projections expressed on the exterior, under gables breaking up the massing, reflecting the design language of the area.

Contrasting colors and textures of siding and stone break down the building’s scale with forms that contribute to the neighborhood character. Glass areas are expressed as tall double hung windows, often ganged in pairs or triples surrounded with wide wood trim. A large L-shaped porch provides a welcoming main entry.

Inside, the new headquarters features open central spaces that engage the main staircase. The versatile open office layout allows sightlines through the interior, augmented by the glass-railed stairway and full-height glass walls into conference and “huddle” rooms. The traditional building expressed on the exterior is carried through inside, where rich wood cabinetry and trim moldings blend with the sleek glazing to establish a unique charm. 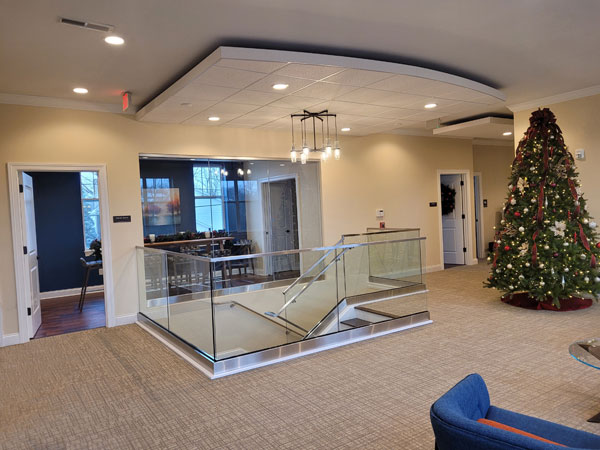 A Hillside Site Became An Advantage

The sloped terrain presented an opportunity for a large scale “walk-out basement” where the lower level finished space has direct access and natural light, utilizing the grade change to enjoy broad views of the valley beyond.  Part of the design intention was to allow the building to have a separate community space that could be rented out and operated independently from the offices. This lower level space is ideal for this purpose, as it has its own entry from the rear parking lot and can easily be isolated from the offices above. 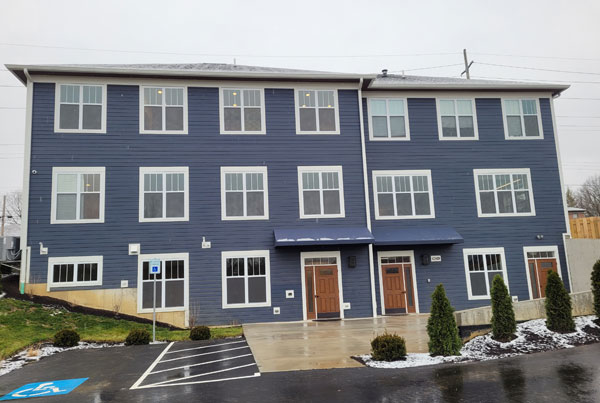 Making the Most of a Constrained Site

Childress & Cunningham Architects has a substantive history of helping clients to make the most of a difficult site. Cincinnati’s hilly terrain and sometimes dense urban neighborhoods combine to create challenges that invite clever solutions.

At first glance, this low density, suburban site might not seem so constricted, but multiple overlapping easements acted like an invisible hand guiding the site plan. An existing electric utility easement constrains the front and one of the side yards. The sloping lot that provides the opportunity for the walkout lower level also dictates retaining walls to facilitate a productive use of the site, with parking and outdoor patios.

The parking lot was designed to take into account two additional code required access points, one for the lot just east, which is near street level, and one to the south at a much lower elevation. Rear driveway access connections were a requirement of the overlay district, and easements were planned to support future development of adjacent parcels. The parking lot took on an L-shape, picking up the first access point just before ramping down to pick up the second access point behind the new building. 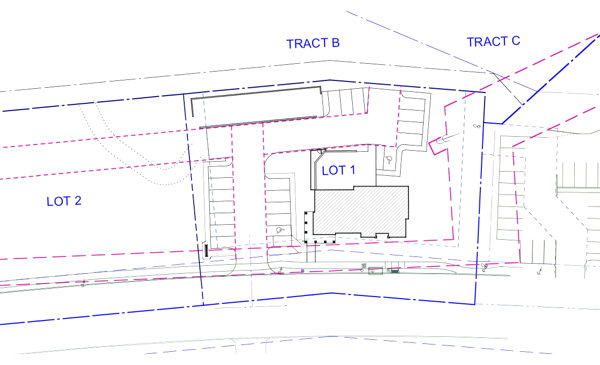 This new headquarters building fits in well with its quaint neighbors while conveying a uniquely charming identity for Harvest Financial Advisors. Childress & Cunningham Architects was there to guide the entire process, from concept through to completion.

Previous construction progress updates:
Closing Up The Envelope
Reaching The Roof
Digging Up The Dirt