Designing for church growth means developing a comprehensive master plan and then following through on that plan with additions and renovations that adhere to both the immediate budget and the long-term vision. For Beautiful Savior Lutheran Church & School, this process has involved a lasting working relationship with Childress & Cunningham, as multiple design challenges have been solved, including parking, additional classrooms, and now a new main entry.

Over fifteen years ago, redevelopment of the front parking lot was accomplished to anticipate a covered entry that would give the building a new identity from the street. As the original Sanctuary and Narthex had been added onto several times since being built in 1973, other building elements tended to dominate the facade, and a much-needed classroom addition in 2016 brought the front building line closer to the street. A covered drop-off, or Porte Cochere, was designed in 2021 to provide a welcoming outreach to visitors and long-term members of the congregation, and is now under construction. 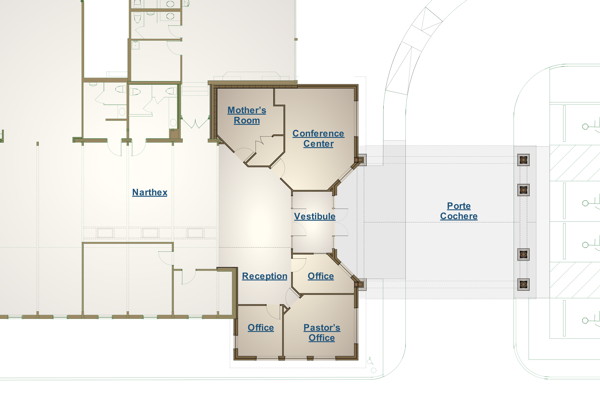 The new entry provides the function of a weather-protected means of arrival, which the church was lacking. Achieving a vertical clearance of 14 feet, trucks and taller vehicles will be able to make safe use of the covering. This height gives the new entry a marked contrast to the low rooflines of the existing building beyond. A stained glass feature window on the gable end conveys the sacred nature of the space beyond, while broad openings along the sides allow for a light, airy feel.

Just inside the entry vestibule, there are new offices for the church staff, adjacent to existing offices. Flanking are a new large conference room and a Mother’s Room for use during church services. These spaces surround a modestly enlarged Narthex with a cathedral ceiling to match the existing vaulted interior. New skylights are introduced in the existing Narthex roof to brighten the space and highlight a feature wall with an existing wooden cross.

All of this occurs within an addition of less than 3,500 s.f., about half of which is the Porte Cochere. The construction of this new entry is the culmination of the first master plan that was developed in 2005.

Recognizing their need for land where further additions could be placed, the church acquired an adjacent parcel to the south. While pursuing Zoning approval for the new entry, Childress & Cunningham was able to assist the church to get their parcels officially combined, which makes any future work more feasible and compliant with current zoning regulations.

Considering the possibilities afforded by the enlarged parcel, a second master plan has been executed to explore options for the creation of an enlarged Sanctuary, together with repurposing of existing spaces. Since Beautiful Savior operates a private elementary school in addition to their church functions, the covered entry now being built may one day serve as the school arrival point, with an additional entry serving the worship space to be built facing new parking. 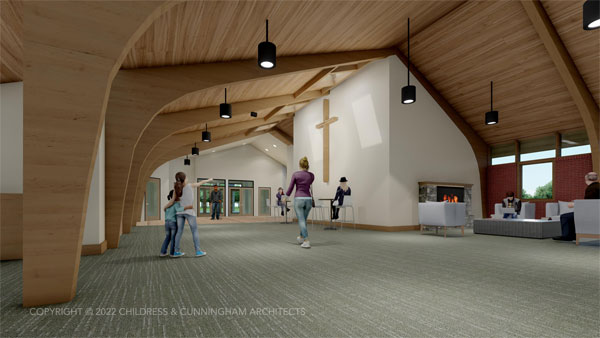 In an ongoing relationship with C&C for so many years, Beautiful Savior Lutheran has an architectural advocate that understands church needs and long-term goals, and continues to provide thoughtful design solutions.